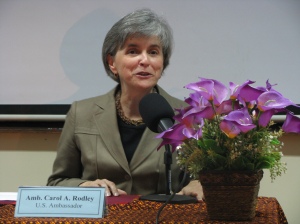 Phnom Penh, Cambodia- the U.S. ambassador to Cambodia, Mrs. Carol A.Rodley addressed the students of the Department of Media and Communication, Royal University of Phnom Penh on the relationship between the United States and Cambodia.

She emphasized a number of important tasks which the United States have been performing in Cambodia such as counter-terrorism, human trafficking, environment, education, agriculture, health care, military cooperation and helping Cambodia to recover from the world economic downturn.

To date, the United States has done many activities in Cambodia such as providing countryside children with the access to education and health care centers.

She said the United States currently aids $5 million to Cambodian Extraordinary Chambers in the Courts of Cambodia (ECCC) to continue the process of trial of Khmer Rough Leaders.

Cambodia has also joined hand in hand with the United Nations by sending peacekeeping troop to support U.N in Sudan and Central Africa, said she.

She also awarded the students who have made video clips on the topic “What is democracy”.

To be noted that the ties between the two countries was distort in 1974 due to the detonation of the bombs in Cambodia. The United States removed Cambodia from the black list of economy last year, which allows the American investors to Cambodia.