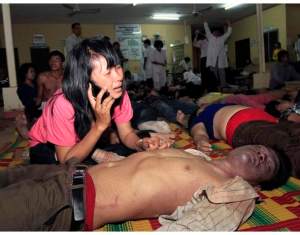 PHNOM PENH, Cambodia — Investigators in Cambodia said on Wednesday that a stampede that caused the deaths of 350 people who were suffocated or crushed Monday night was probably touched off by the slight swaying of a short suspension bridge packed with holiday-goers on the last evening of an annual water festival.

The report, carried on Bayon TV, a government-owned station, said the dead were among some 750 victims, most of them from among the millions of rural people who travel to the capital each year for the festival. The figures from Wednesday’s government report lowered earlier estimates of 378 dead and 755 injured.

By Wednesday morning, most of the dead had been identified at hospitals and transported in the backs government trucks to their villages, along with grieving relatives.

At Calmette Hospital, where 140 people had been laid out in white sheets in an outdoor morgue, just three bodies remained unclaimed. Several people wandered the hospital’s grounds holding snapshots of missing relatives, including smiling wedding portraits and holiday photographs.

The bridge where they had died, roped off with yellow tape, remained littered with the sandals and shoes and bits of clothing that had been torn from the victims in the crush.