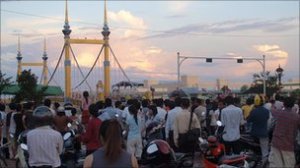 PHNOM PENH, Cambodia — Cambodia’s prime minister said Monday that no one will be punished for last week’s stampede in which at least 351 revelers died after the swaying of a suspension bridge cause mass panic.

Hun Sen said many people share responsibility for not anticipating the problems that caused the Nov. 22 tragedy but that rescue efforts were adequate and, without them, the death toll would have been higher.

“No one will receive punishment for this incident,” Hun Sen said at the opening of a new government building. “We have to learn a lesson from this for solving such problems in the future.”

Preliminary findings by an official investigation committee found that the natural swaying of a suspension bridge ignited fears it would collapse among an estimated 5,000 to 7,000 people on the structure. In frantic efforts to escape, the crowd pressed and heaved, crushing hundreds of people and leading some to dive off the span into the water.

The official casualty toll is 351 dead and 395 injured. It was updated Sunday, after two more people died of their injuries and two others were added to list of dead by relatives said they had taken their bodies home.

The stampede occurred on the last day of a three-day holiday, as a crowd estimated to be more than 1 million thronged to the capital to celebrate the traditional water festival.

Last week Hun Sen has described the stampede as the biggest tragedy since the communist Khmer Rouge’s reign of terror, which killed an estimated 1.7 million people in the late 1970s.

“It happened unexpectedly,” said Hun Sen. “If we had correctly assessed in advance that there could have been a stampede, then we would not have allowed people to cross the bridge.”

Hun Sen also announced that the families of each of the dead people would each be given at least $12,000, an enormous sum in a country where the annual per capita income is just over $700.