Sitting in front of his three by four meter rent room adjacent to a less busy road in Siem Reap provincial Soutnikum commune and suspending several paintings on the wall, a 24-year-old Chhim Phai is painting a picture of a girl carrying a pot with beautiful background by careful concentration, though there is sound from the vehicle travelling and kids playing. 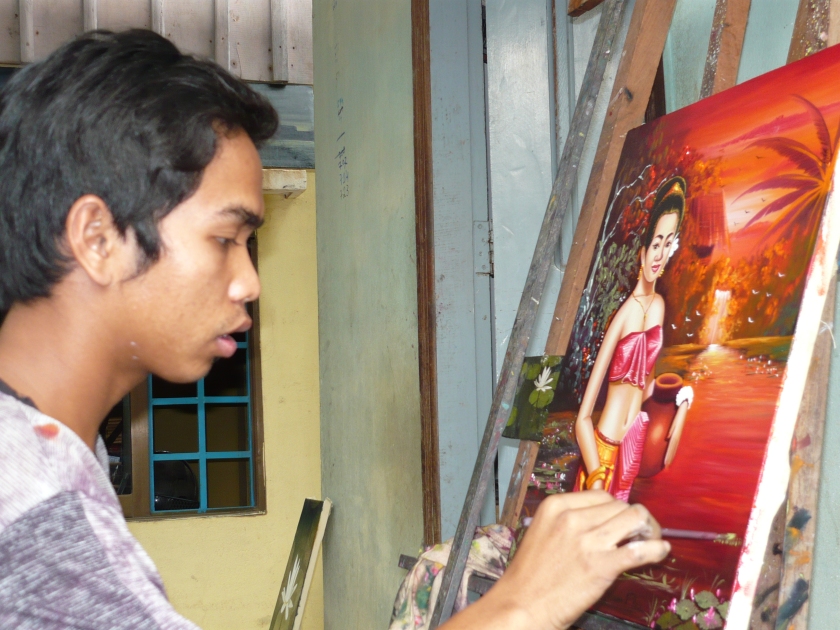 Every day, he always paints four to five pictures for his customers both foreigners and local sellers at night market in Siem Reap. He has been painting for nearly four years after he studied painting informally with a painter in his hometown five years ago. Born in Prey Veng province, Chhim Phai was the youngest in a family whose parents are the farmers. Due to his poor living condition of the family, he decided to stop studying at grade 9 so that he can help his parents.

However, he, in order to build his good future of holding a specific career, started learning painting which is his desire and gift from birth. “I like painting since I was young. It is my genius, so I want to achieve my ends of becoming a painter,” he said. After studying painting for one year, he painted pictures for the pagodas in his hometown until 2008. Due to the fact that he wanted to earn more money for family, he moved to live in Phnom Penh in 2008 and then he has moved to Siem Reap where he could paint pictures for the foreigners.

“Here (Siem Reap), I can make much more money than in Phnom Penh since there are a lot of foreigners and customers. I have market for all paintings,” He said that he sells his pictures to the sellers at night market in Siem Reap for 7 dollars per picture and from 15 to 20 dollars for foreigners who come to buy directly at his painting place. “It is my own work and I have no one ordering me. I can earn from this to support my family in the province,” He said that foreigners who bought his paintings always compliment his good achievement, adding that he can paint all kinds of pictures, adding that he paints by thinking of the creating something new and strange which is popular to foreigners.

Due to the needed support from him for the family in the province, Chhim Phai burdens the family’s income every month by sending the remittance of 100 to 150 dollars of his income to his family. “I rent the room for 30 dollars and I save money for my family in the province,” Regarding his painting, he said that he found a bit difficulty with mixing color of painting for some complicated pictures. “I try to make my pictures strange since foreigners like that,” he said. Besides this, in order to share his knowledge, techniques and experience of painting, Chhim Phai has been teaching some students how to paint pictures. “I want to work with painting for my life and I hope my painting will well-known locally and internationally one day,” he said.