A few years ago, the Phnom Penh authorities decided to crack down on karaoke parlours. They raided several of them to ensure no human trafficking, drug abuse or other crimes were being committed by guests, especially young people. 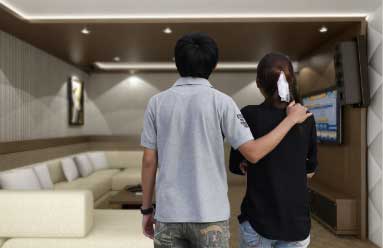 This crackdown left a lot of students, who enjoy going to karaoke parlours with their family members and friends purely for pleasure, afraid of being arrested by the police during a raid. Despite this, we have noticed that karaoke parlours of all descriptions have mushroomed in Phnom Penh, and crackdowns and checks rarely occur these days. Statistics compiled by the Phnom Penh Municipality indicate that in 2001, there were roughly 300 karaoke parlours in the capital, most of which were adjacent to schools, tourist areas, pagodas and hospitals.

By 2010, according to the Ministry of Tourism, the number of karaoke establishments – big, small, modern, makeshift, authorised and unauthorised – in Phnom Penh had risen to as many as 400. Karaoke parlours are now ubiquitous in the capital, attracting big crowds of young people and students. Some students seek entertainment and a break from their studies by going to clubs and karaoke parlours.

Besides the crimes and other things that happen at these parl-ours, one issue of concern is that their rooms become a place for lovers to become intimate and have sex. According to information I have collected from young people who are aware of the problem, a lot of lovers go to normal karaoke houses, then begin having sex there. They say some closed karaoke rooms are decorated as rooms for having sex, and condoms are available in them.

A male student who asked not to be named said he had often gone to sing karaoke with his girlfriend, then had sex with her there. He said he always went to karaoke houses where he could have sex. The authorities should take more action to curb the growth of karaoke clubs, as they can become places where some young people find themselves tempted to have sex. This behaviour will distract young people from their studies and expose them to the risk of early pregnancy and contracting sexually transmitted diseases such as HIV.

The authorities have to deal with this issue by again cracking down on karaoke parlours and stepping up checks to prevent sex and illicit behaviour in karaoke rooms. A survey conducted in August, 2002 by Hean Sokhom, of the Centre for Advanced Study, on the behaviour of women working in the entertainment sector in Phnom Penh found more men were having sex with indirect sex workers (mostly young women aged between 16 and 25) in nightclubs, karaoke houses and massage parlours than with direct sex workers. Some big karaoke parlours in Phnom Penh have obscene images on their walls.

This is inappropriate, because it can cause young patrons to have sexual feelings, and the authorities should take more action to tackle these irregularities. I believe bribery is still a problem, as it can lead to immoral activities in karaoke parlours. The Phnom Penh Post reported on May 5 last year that the Chamkar Morn district governor had been accused of accepting bribes from illegal karaoke parlours so they would not be raided by the police. As long as bribery remains an issue, there will still be irregular activities in karaoke rooms.

Late in 2001, Cambodian Prime Minister Hun Sen issued an order to shut down nightclubs, discotheques and karaoke parlours nationwide in a move aimed at clamping down on human trafficking, drug abuse and other crimes. The authorities should take more action to curb the growth of karaoke clubs, as they can become places where some young people find themselves tempted to have sex. In addition, the authorities need to crack down on unauthorised parlours, as they can be venues for crimes and sex abuse. I would also recommend that young females be careful when going to karaoke parlours, as they can be sexually harassed or abused.