Kandal Krom is a small village in the former Khmer Rouge stronghold of Anlong Veng near Cambodia’s border with Thailand.

Villagers here complain of a lack of clean water and electricity, despite the village’s location close to Anlong Veng town.

Phat Run, 65, a former Khmer Rouge member, says access to these vital resources will be a big issue at the forthcoming local election in June.

She says she wants a new commune chief to be elected “to dig wells since we don’t have drinking water during the dry season,” although she has yet to decide whether to vote for the ruling Cambodian People’s Party or the opposition Cambodia National Rescue Party. Another former cadre, Bou Khorn, 61, said she has also yet to decide who to vote for, adding that if a new candidate could ensure a reliable electricity supply to the village, they would likely get her vote.

Meanwhile, Uon Roeum, 60, said raising the cost of crops such as rice and cassava would go a long way towards gaining support among the locals in this farming-reliant area.

“I want the price of cassava to increase. I work very hard, but it’s cheap. Rice is cheap, so is cassava. I want a new commune chief to help,” she said.

Chorn Kimchhun, 29, the daughter of a former Khmer Rouge soldier, says she has already decided to vote for the incumbent, because he is “not corrupt and helps the people”.

She said that many of the villagers are concerned about renewed conflict if there is political tensions during the election, while many had heard rumors of threats of war from Hun Sen. 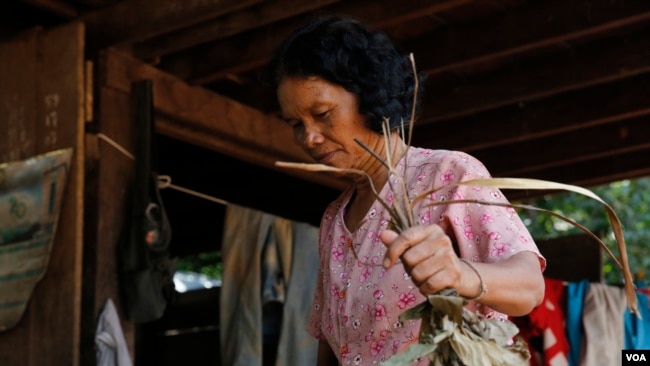 Um Meng, the deputy village chief, said neighboring villages faced similar problems of a lack of water and electricity, failures that have gone unexplained to locals.

The idea of change, for those in former Khmer Rouge areas, is associated with conflict, says Am Samang, a former council member for the now defunct opposition Sam Rainsy Party.

“They are afraid that changing the prime minister will lead to war. They don’t want to face war again. Most villagers I met are thinking like that,” he said.

“Go and ask people; don’t ask me about how people will vote. I’m just standing as the candidate,” he said.

The CPP won seven out of nine council seats in Anlong Veng commune at the last election in 2012, taking more than 8,000 of the 11,500 seats nationwide.

Teum Hoeurn, the CNRP candidate, said he expects the opposition to win at least three quarters of the seats at the next election.

“There has been no solution to the land conflicts for the people,” he said.