SIEM REAP, CAMBODIA — Chen Sokngeng, 26, is the youngest commune chief who won in the July 4 election. Campaigning on an anti-corruption platform, he claims to have signed off on hundreds of documents since taking office.

The Sala Kam Reuk commune chief said the commune office is markedly busier than is was under the guardianship of his predecessor.

“Most of the documents, we just spend two hours checking and signing them for people and six hours at the longest, if they lack some documentation,” he said.

Legally, commune councils have three to seven days to complete paperwork on behalf of constituents, but in the past many complained of sluggish service or bribe-taking from officials to speed up processing.

“There is no table for taking money for services. I have committed myself to not take money from people. We charge in accordance with the costs set by both the Ministry of Economics and Finance and Ministry of Interior,” he said.

The ruling Cambodian People’s Party won 1,156 seats to the CNRP’s 489, with one seat claimed by the Khmer National United Party. The CNRP did best in major cities such as Siem Reap, where it won control of the majority of councils.

Communes in Cambodia receive modest budgets in the low tens of thousands of dollars. The opposition has claimed it would allocate at least $500,000 to communes if it wins the 2018 election.

Sokngeng has called on the defeated commune chief, Sam Lorn, 60, who is still a councilor, to work with him in constituents’ interests.

“I am always pleased to have any discussion. I also respect him like my parents,” he said. 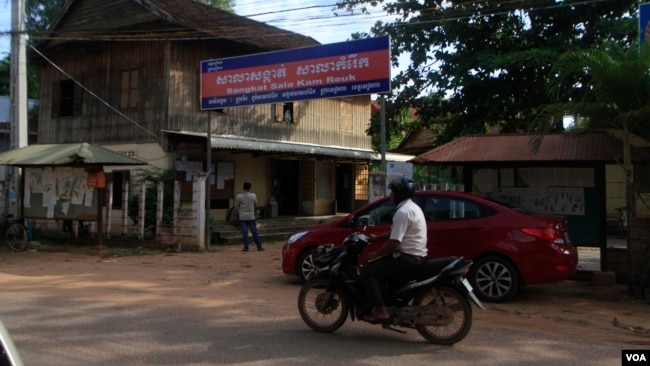 Sokngeng joined the opposition in 2011 and was elected president of the CNRP youth movement in Siem Reap last year. After taking up the post he met with 21 village chiefs to discuss local issues.

In the meeting, the village chiefs spoke of environmental issues such as problems with sewage and waste disposal, prompting Sokngeng to announce he would establish a local environment committee.

Mom Pheng, 70, one of the village chiefs and a CPP member, said the local officials from both major parties needed to cooperate. “We have to cooperate with each other. If he is right, we need to follow, but if not, we have to discuss among ourselves.”

Vorn Chhorvy, 17, said the administration process was fast under Sokngeng’s leadership. “I was welcomed. When I arrived, he asked me to wait since he was busy in a meeting. When he finished, he signed the documents for me,” she said.

Sanith Thorngdy, 37, another villager, agreed. “It didn’t take long. It was just half an hour.”

“I work and we respect his rights as the head of the commune council. When I think I have an opportunity to help people, I have to take part,” she said.